Every July, our team at Merit Medical recognizes Fibroid Awareness Month as a time to bring attention to a very common yet under-discussed condition that will affect most women at some point in their lifetime. 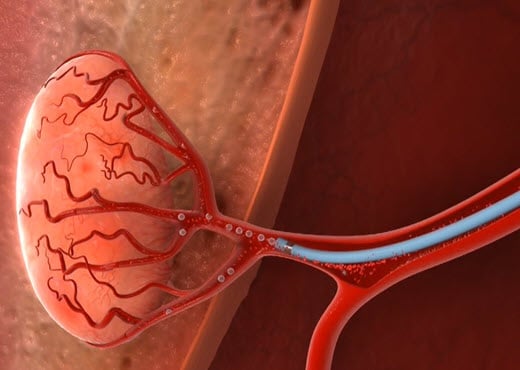 Published in Radiology, the study enrolled 54 women with fibroids (mean age, 44 ± 4 years [standard deviation]) and assigned UFE treatment with either nonspherical PVA (355–550 μm) or Embosphere (500–700 μm). There were 27 women in each group, and both participants and investigators collecting data were blinded to the embolic material used. Women with concomitant disease (e.g., adenomyosis) were excluded from the study.

Both groups were given fentanyl-based intravenous patient-controlled analgesia within the first 24 hours after UFE as well as rescue analgesics. The investigators measured neutrophil-to-lymphocyte ratio to assess inflammatory response, and contrast-enhanced MRI was performed 1 day after the procedure to evaluate dominant fibroid necrosis and ischemia of normal myometrium. Symptom severity score and health-related quality-of-life score were assessed before and 3 months after UFE.

In addition, changes in neutrophil-to-lymphocyte ratio from before to 24 hours after UFE were greater in the PVA group (3.9 [interquartile range, 2.7–6.8] compared to the Embosphere group (2.5 [interquartile range, 1.5–4.6]; P = .02). Rates of complete dominant fibroid necrosis were not different between groups, but transient global uterine ischemia of normal myometrium was more frequent in the PVA group (44% vs 15%; P = .04).

The investigators of the study concluded that when used in UFE, PVA particles and Embosphere resulted in similar pain scores and fentanyl dose. However, PVA resulted in a greater inflammatory response, higher rates of rescue analgesic use, and more frequent transient global uterine ischemia compared to Embosphere.

Fibroids (also known as uterine fibroids, leiomyomas, and myomas) are non-cancerous tumors that grow within the muscle tissue of the uterus. Although some fibroids cause no symptoms at all, common symptoms can include excessive menstrual bleeding, pelvic pain and pressure, and frequent urination. Depending on the size and location of the fibroids, other symptoms can include anemia, leg pain, pain during sexual intercourse, constipation, and an enlarged abdomen. Up to 80% of women develop fibroids by the time they reach age 50.

To encourage women to seek out all treatment options and help physicians educate patients, we offer an educational patient-awareness site called Ask4UFE with information about treatment options—with focus on UFE—as well as patient and physician testimonials and researched blog entries.

Join us in recognizing July as Fibroid Awareness Month. We look forward to working together to increase awareness surrounding the condition, helping to provide the best resources, products, and care for patients worldwide.

Before using, refer to Instructions for Use (IFU) for indications, contraindications, warnings, precautions, and directions for use.