You are here: Home1 / Now Available in the US, Surfacer® System Provides Treatment Option for ...

Now Available in the US, Surfacer® System Provides Treatment Option for Venous Obstructions

Merit Medical® is committed to offering products that provide patients with better dialysis access options. The newest of these innovations is the Surfacer® Inside-Out® Access Catheter System, a unique device designed to obtain right-sided central venous access in patients with venous obstructions. The Surfacer System received FDA De Novo classification in the US earlier this year and has been CE marked in Europe since 2016.

The current clinical approach when treating dialysis patients with chronically occluded central veins is to use another vein if a subsequent central venous catheter is needed. Failed venous access attempts may prevent permanent arteriovenous access, increasing patient morbidity and the overall cost of care.1 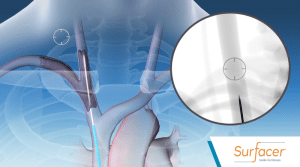 Additional clinical benefits of using the Surfacer System were seen in its first-in-human study.2 Results showed that 100% of patients experienced successful central venous access placement, and 100% of patients maintained central venous access patency through long-term follow up. No device-related adverse events were reported at short- or long-term follow up. To learn more about the Surfacer System’s first-in-human study, view the article published in Endovascular Today. 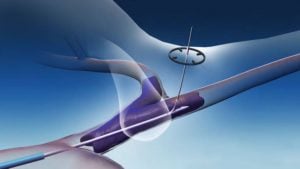 In May of this year, the Surfacer System’s first US-based commercial cases were completed at Santa Clara Valley Medical Center in San Jose, California, one of several clinical sites for the US investigational device exemption (IDE) study, which led to FDA De Novo status. Ehab Sorial, MD, and Ajit Nair, MD, performed the procedures in two hemodialysis patients with central venous obstructions, one of which had limited access options.

“The Surfacer System provides us with a safe and effective option for obtaining right-sided central venous access in patients with venous obstructions, enabling us to preserve secondary central veins and avoid alternative access procedures, which are not as effective and have a higher risk of complications,” explained Drs. Sorial and Nair in a press release. Read the full press release here.

Merit currently distributes the Surfacer System in North America and Europe. With the device’s recent launch in the US, Merit is proud to play an integral role in providing physicians with life-saving technologies for their patients around the world.

All trademarks are property of their respective owners.