You are here: Home / Comparison of Clinical & Radiological Data in Treatment of Osteoporotic...

PURPOSE: Since the 1990s, balloon kyphoplasty has been proven as an effective method of treating patients with painful vertebral compression fractures (VCF). The RF-TVA is an innovative procedure available since 2009, for which an ultra-high viscosity cement is used. For the statistical comparison of the two methods of augmentation, the clinical and radiological data of 2 large patient groups were evaluated – a prospectively collected RF-TVA treated group and a matched pair BKP treated group.

MATERIALS AND METHODS: A prospective study of RF-TVA was performed between 2009 and September 2010 using the StabiliT® Vertebral Augmentation System. For the BKP group, patients with the same clinical and radiographic parameters as in the first group were evaluated (matched pairs). Clinical parameters for efficacy and safety were pain intensity using a visual analogue scale (VAS: 0 to 100 mm) and function using the Oswestry Disability Score (ODI: 0 to 100%). Height restoration in the middle and anterior parts of the treated vertebra and reduction in kyphosis after RF-TVA and after 6 months were evaluated. Cement extravasation and operation time were compared. To compare the data statistically, parametric and non-parametric tests were applied.

RESULTS: 114 patients were enrolled and treated in the RF-TVA group and 114 patients (matched pair) previously treated with BKP were selected. Prior to treatment 84 mm on the VAS were calculated in both groups. The decrease in VAS values (RF-TVA vs. BKP) immediately after surgery was 58.8 vs. 54.7 mm (p = 0.02), and 73.0 vs. 58.9 mm after 6 months (p < 0.001). Both groups had significant improvements in ODI function scores after 6 months without a statistically significant difference. In both groups, the middle part of the vertebral bodies was increased by an average of 3.1 mm. RF-TVA yielded a decrease in the average kyphosis angle of 4.4, the BKP resulted in about 3.8 degrees. Extravasation was significantly less in the RF-TVA treated group (6.1 % vs. 27.8%; p < 0.0001). The RF-TVA procedure was significantly shorter than BKP (28.2 vs. 49.6 min; p < 0.001). 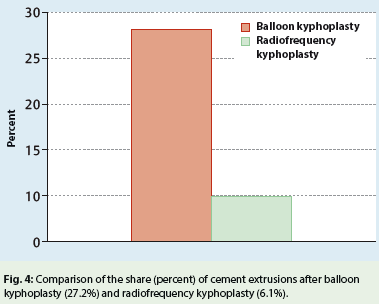 CONCLUSIONS: The RF-TVA has proven to be a clinically very effective procedure. No differences could be detected regarding improvement of functioning and the mean restoration of mid- and anterior vertebral height. RF-TVA offers the advantage of a statistically significant lower proportion of cement extrusion.