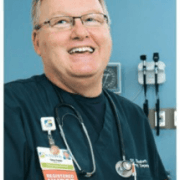 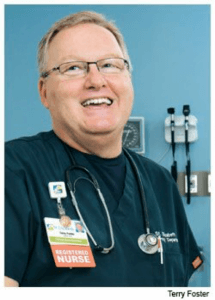 Terry M. Foster holds a Master’s Degree in Critical-Care and Trauma Nursing from the University of Cincinnati College of Nursing and Health, having previously earned his LPN and RN. His primary areas of nursing experience have always been in the Emergency Department and Critical-Care Units, holding several national certificates. Terry has lectured on a wide variety of clinical topics at nursing seminars and conferences throughout the USA, having given a total of over 5,000 formal presentations. He has authored more than 40 professional publications and is currently the Critical-Care Clinical Nurse Specialist in the six Emergency Departments at St. Elizabeth Healthcare in Edgewood, Kentucky. Read more about Terry Foster.

*This Program Has Been Approved by the American Association of Critical-Care Nurses (AACN) for 1.00 Synergy CERP Category A, File Number 21722. 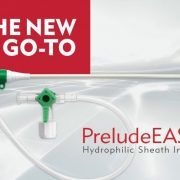 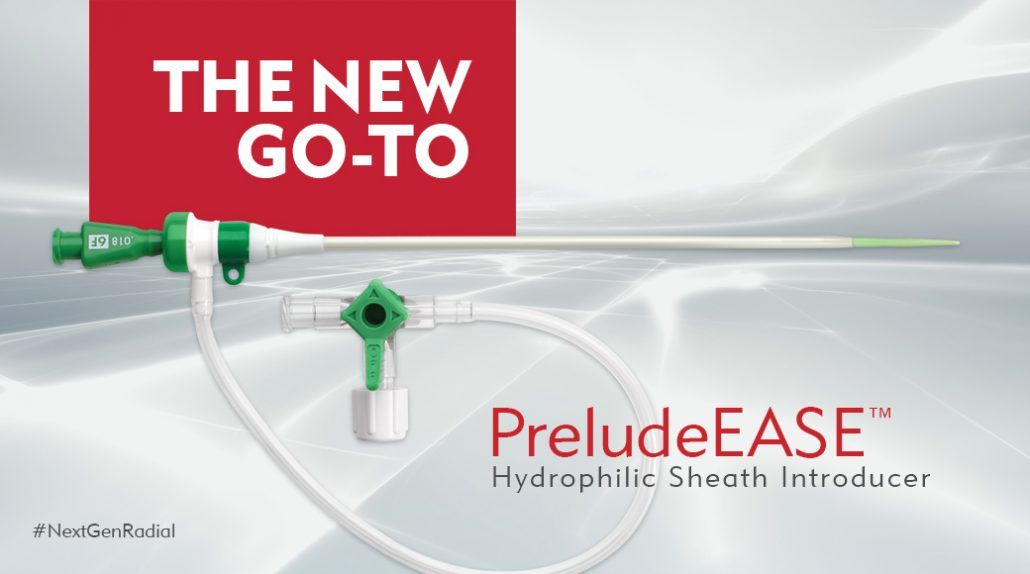 At Merit Medical, we’re dedicated to using the most advanced materials, designs, and manufacturing techniques with the goal of delivering solutions you can always depend on. Our PreludeEASE™ Hydrophilic Sheath Introducer is a perfect example of this commitment. Designed for strength, data shows the PreludeEASE resists compression better than the leading competitor—making it the New Go-To sheath.1

Compression resistance is an essential factor when considering a new sheath. Case studies have shown that if an arterial spasm occurs during a procedure, it can lead to the sheath compressing into the catheter, entrapping it within the vessel, and making removal of the catheter from the sheath difficult.2

Some thin-walled sheaths can be prone to compression and kinking that could result in difficult catheter manipulation. In the event of radial spasm, the catheter and sheath may need to be removed. Using a product with robust sheath tubing, like the PreludeEASE, may help clinicians avoid this problem. When tested against the leading competitor, the PreludeEASE displayed excellent compression-resistance performance.1

Other PreludeEASE advanced features include a large inner diameter for easier transitions and increased device compatibility and hydrophilic coating to facilitate insertion and removal as well as patient comfort.3 Moving smoothly from wire to dilator and dilator to sheath, the PreludeEASE streamlined design requires up to 30% less insertion force in comparison to the leading competitor.1

To accommodate varying patient anatomy, the PreludeEASE is available in multiple size configurations that range from 4F-7F diameters and can be customized in kits and packs to include other tools you need to achieve radial success.

Explore the New Go-To PreludeEASE and all it has to offer by visiting the PreludeEASE product page or talk to a knowledgeable Merit representative today. 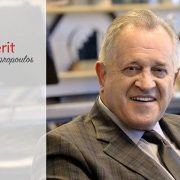 Thirty years ago, Merit Medical got its start by doing one simple thing: paying close attention to the clinical needs of physicians. At a time when glass syringes were the industry standard, Merit wanted to create something better. From this vision, the polycarbonate Coronary Control Syringe was born. It was the first of its kind and it was Merit’s first manufactured medical device on the market.

We sat down with Fred Lampropoulos, Chairman, CEO, and Founder of Merit Medical, to hear the full story of how this single innovation led to the rise of an international corporation that now employs almost 5,000 individuals and generates $750 million in global revenues.

“At the time, I had left as Chairman and CEO of Utah Medical, voluntarily. I really wanted to look at my life. I had thought about going to medical school,” Lampropoulos says. “After that, I decided I was going to start up a new company.”

In order to understand the clinical needs of the cardiology world, Fred did what any eager anthropologist would do and went native. He began spending much of his time with thoracic surgeons and cardiologists, scrubbing in on cases and observing everything possible. He describes this point in his life as a time he learned most simply by watching. Doing so allowed him to anticipate the needs of physicians and flex his creative muscles.

In one memorable instance, he describes a time when he noticed clinicians taking a spike, taping it onto a bottle of contrast media with the spike not fully inserted. “I could never figure out why they were doing that,” Lampropoulos recalls. “I asked somebody and he said, ‘The stuff in this bottle is really expensive. We want to be able to have the spike where it’s at the lowest point possible. [The spike] either falls out, or someone will just barely tap it, and it’ll fall out. And you’ve got contrast [all over], which is very messy. So, we tape it.’”

This led to Fred’s first prototype.

“I came up with an idea that we’d develop a spike that had a little [part] you could push and the teeth would come over the head of the bottle and it would hold in there. It wouldn’t fall out,” Lampropoulos explains. “It was just observing and listening.”

As time went on, the art of observing and listening—that was once the foundation of a burgeoning business plan—turned into millions of dollars in sales and what sets Merit apart in the medical device industry today.

Referring to another unforgettable case, Fred describes a time when he observed a physician using a syringe filled with contrast and blood. “He was expelling it into a metal basin and [its contents] came up over the top and rolled down on the drape. It went all over the place,” Lampropoulos describes. “I went to the plant in the morning, got a couple of engineers together and said, “This is what I observed. This is what I heard. This is what I want to do.”

In a matter of hours, Fred’s team came back with a prototype, now sold as the Merit BackStop® Disposal Systems. “It was literally from just being there,” Lampropoulos says. “I think we have sold, over the years, 100 million dollars worth of those BackStops. But more important than just selling something is the fact that we have a containment device that helps to minimize bloodborne and airborne pathogens. That was the key. You can watch and listen, but it has to meet a customer need at the same time.”

As a US military officer and combat officer, Fred learned the importance of observing and listening, while simultaneously making decisions quickly. “You take a look at the business, how you strengthen it, and how you gain an advantage over your competitors,” Lampropoulos explains. “There are a lot of pieces that go into that.”

One significant piece that Fred attributes much of his success to is that of teamwork. An avid baseball fan, he compares the well-oiled machine that is Merit Medical to a “team that can play all the positions and can deliver runs and hits.” Full of “very competent, hardworking people who share a vision,” Merit Medical has been able to expand internationally.

With facilities in the US, The Netherlands, France, Ireland, China, Mexico, Brazil, Canada, Singapore, and Australia, Fred says Merit encompasses a core philosophy no matter where they are. “We’ve been able to build a company that really has encompassed a strategy. Whether you’re in Singapore, Galway, Tijuana, or Toronto, there’s a core of beliefs, standards, and efforts on how we all fit into this puzzle that ends up very candidly looking like a masterpiece.”

One only has to read Merit’s vision to see that it’s a customer-focused company in healthcare. Determined each day to make a difference by “delivering products that improve the lives of people, families, and communities throughout the world,” Merit prides itself on driving the cost of medicine down. “I remember our inflation devices when we first started were selling for $85,” Lampropoulos continues. “Today, they sell for $30. We’ve made tools that make it easier for a physician to treat a patient. That’s a big deal.”

By providing tools that simplify and improve patient care, Merit has been able to make several primary therapies more accessible. Peritoneal dialysis, catheter ablation, uterine fibroid embolization (UFE), and the recent FDA-approved prostatic artery embolization (PAE) are only a handful of therapies Merit supplies with state-of-the-art tools and devices. “There are a lot of things we’re doing for patients, and in some cases, they wouldn’t have an alternative,” Lampropoulos notes. “We treat and save 15,000 lives a day. That number keeps going up.”

Looking into the future, Fred believes that in order to continue this crucial work, Merit must remain a steadfast leader in emerging therapies and technologies. Uninterested in short-term business deals, Fred says Merit will maintain its vision and invest long-term. “It’s a huge advantage over others who are being consolidated or are flipping a company or just trying to be a serial entrepreneur. It’s just never what I wanted to do,” Lampropoulos clarifies. “I wanted to build something of lasting value and I think we’ve done that.”

Long-term vision is what Fred says has done more than just make money. Because of the family values Fred has infused in his company, Merit has created countless jobs, fed and educated families, and helped send their children to college. “In some cases, we’re hiring their kids now as our engineers,” Lampropoulos adds. “That is very gratifying.”

From a community standpoint, Merit has supported the arts and sciences, as well as worked with homeless and youth centers—places where Fred believes Merit has a corporate responsibility. “It’s not some newfound belief. It’s something that we started out from the very beginning. I think we have been and have tried to be, within our means, a responsible corporate leader.”

When asked if he’s proud of all he has accomplished in the last 30 years, Fred remains humble. “I don’t think much about what I’ve done because I don’t have much time to do that,” he responds. “I don’t want to look at the back window, I want to look out the front window. Did we think we would be here today? The answer is we hoped we would be.”