Formalin, an aqueous solution of formaldehyde, is widely used in tissue preservation protocols due its favorable fixative properties. However, its routine use in healthcare settings may also expose workers to underappreciated hazards. In studies stretching back several decades, exposure to formaldehyde, the main ingredient in formalin, has been linked to respiratory tract and skin irritation after immediate exposure. Long-term formaldehyde exposure has also been shown to increase the risk for developing nasopharyngeal cancer, sinonasal cancer, and myeloid leukemia. Indeed, basic science research and studies in various animal models have revealed the mutagenic potential of formaldehyde, underscoring the need for safety protocols that help mitigate exposure. The recent introduction of innovative solutions for specimen handling are helping to reduce or eliminate formaldehyde exposure in healthcare settings. Merit has recently published a white paper regarding the risk of formaldehyde exposure and the innovations helping to reduce that risk. Read more here.

Background
Formalin, a 37% to 40% aqueous solution of formaldehyde, is widely used in tissue preparation protocols. The fixative properties of formaldehyde were discovered serendipitously in the late 19th century by the German physician Ferdinand Blum, who was studying the chemical as a potential antiseptic.1 However, formaldehyde exposure in occupational settings is associated with numerous health hazards, including eye2 and respiratory stress,3 as well as potentially elevated risk for cancer locally at the site of exposure4 and distally after the initiation of carcinogenic pathways.5

In light of these concerns, several regulatory and oversight bodies have established safe handling protocols, as well as a series of rules and regulations that employers must follow to ensure safe working conditions for individuals potentially exposed to formaldehyde as a result of using formalin.6,7 Most of these recommendations focus on the idea of ensuring that exposure does not exceed safety standards that have been established in numerous scientific studies.

Technology and Innovation
While engineering controls to reduce exposure to formaldehyde appear to be the most optimal strategy for harm reduction, even OSHA acknowledges that such measures may not always be feasible, in turn shifting the burden to employers to safeguard workers against the dangers of formaldehyde exposure.6,7 Indeed, installing general mechanical ventilation across all areas of a hospital or other healthcare setting in which formaldehyde is used may be cost-prohibitive, not physically possible, or else a less than desirable option. 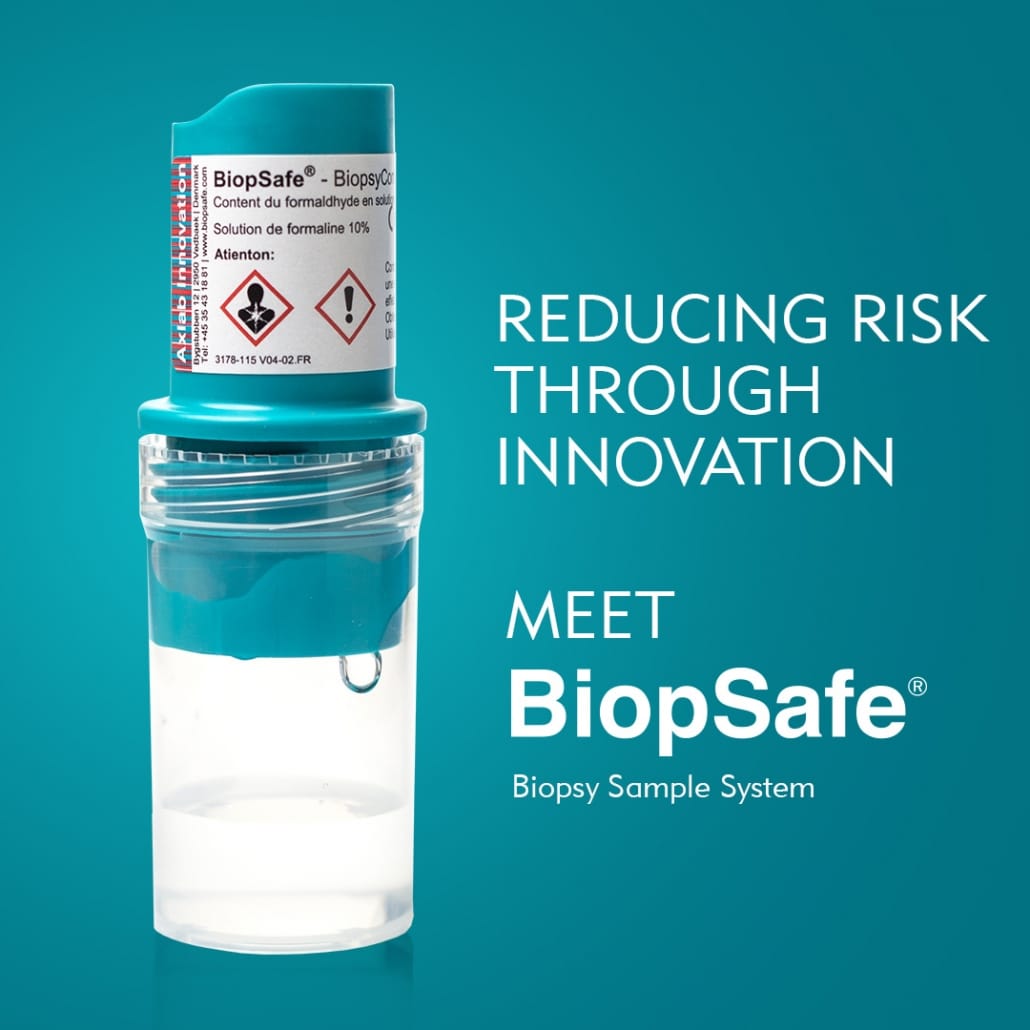 Recent innovations may offer an alternative and decidedly more cost-efficient mechanism for reducing exposure to formaldehyde. The BiopSafe Biopsy Sample System (Merit Medical) is a novel and innovative solution to the need for safe protocols for physicians, technicians, and nurses to use during tissue preparation activities.8 The system consists of a vial and a proprietary lid system that contains capsuled formalin. The product is recommended for use as part of a simple three-step process:

Because all maneuvers are performed inside the sealed vial, use of the system in this manner reduces formalin exposure while still preserving the integrity of the biopsy sample.8 Once preserved, the sample is safe for transport with no further risk of vapor release or liquid spill.

BiopSafe was validated in a two-part study. In the first part, interviews were used to assess staff’s attitudes toward BiopSafe relative to existing protocols. The second part consisted of four tests to study four aspects of BiopSafe using Hounisen Laboratorieudstyr A/S’s closed fixation system as a control. The authors reported that the closed fixation system used in comparison contained 1-5% formaldehyde and 1-5% methanol.9 The formalin in the BiopSafe fixation system contains ~ 4% w/w formaldehyde and <2.5% w/w methanol. The authors concluded that integration of BiopSafe resulted in a low reported level of issues or complications while using the system, and that BiopSafe provided comparable effectiveness as a fixative as long as standard fixation times were used. In addition, there was less risk of fixation artifacts affecting the quality of the sample with BiopSafe compared to the closed formaldehyde system used as a control.9

Conclusion
Throughout healthcare, various safeguards are used to mitigate exposure to potentially dangerous substances. The routine use of gloves and splash guards to protect against blood exposure is one example. As well, lead aprons are used by radiographic technicians and patients to reduce unwanted exposure to radiation. While well intentioned, the current focus on establishing safe and acceptable levels of formaldehyde exposure may provide a false sense of security. On the other hand, innovative solutions currently in the marketplace have potential to reduce exposure to formalin, and thus its main ingredient. Moreover, technology like the BiopSafe Biopsy Sample System protects the individual taking the biopsy sample from formaldehyde without the need for a fume hood in the treatment area. The sealed container further minimizes the potential for leakage or spill, thereby improving safety during transport.